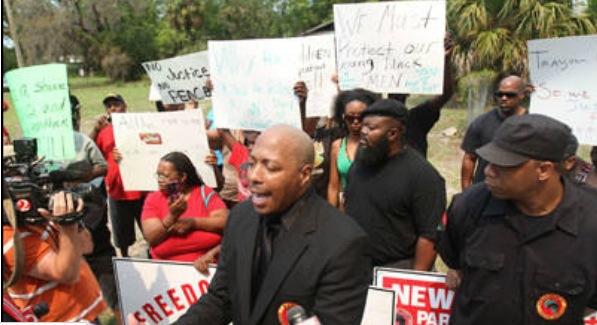 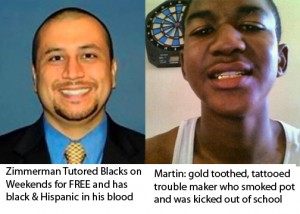 Clearly, as new evidence unfolds in the Trayvon Martin case, the Liberal Left, and civil rights activists will continue their un-justified outrage of a fake racism case.  911 calls indicate George Zimmerman didn’t, in fact use a racial slur, but instead used the word “kid” not “coon” voice experts stated on Monday.

George Zimmerman actually tutored black kids and minorities.   Several witnesses close to Zimmerman and his family vehemently deny that Zimmerman would ever utter racial slurs. All those who knew George for many years stated that Zimmerman was not a racist and, in fact, is part black and Hispanic. “This is a fake racism case”, one neighbor of the Zimmerman’s told the Orlando Sentinel.

As Florida braced itself for what was unwarranted day of unjustified rage protest in the Trayvon Martin case, police stated that the slain 17-year-old was the clearly the aggressor which supports George Zimmerman’s claim that he acted in self-defense when he shot the teenager.

Protesters demanded that  Zimmerman be arrested before the facts come out in the case.  “This rush to judgement from a black lynch mob is an embarrassment to American citizens, especially with Zimmerman being part black and especially when nobody knows the truth”, one Florida bystander said.

A lynch mob style forum was hosted by Roland Martin, a CNN commentator. Green eggs and spam civil rights activist Jesse Jackson led protesters to the Sanford City Commission meeting despite facts coming out the martin was the aggressor and was looking for trouble that day.

The Orlando Sentinel is reporting that police sources say Martin was the aggressor on Feb. 26, knocking Zimmerman to the ground with a single punch and then climbing on top of the 28-year-old neighborhood watch captain and slamming the back of his head into the ground. Police say this account, given by Zimmerman, is supported by eyewitnesses, according to the Sentinel’s report.

One such witness reportedly told police that he saw Martin on top of Zimmerman, striking the man, while Zimmerman cried out for help. The attack left Zimmerman bloodied, police sources told the Sentinel, and led him to fire at Martin in self-defense.

Police say Zimmerman was bleeding from the nose, had a fat lip and confirm that the back of his head was cut. He received first aid at the scene but refused to go to the hospital and received medical treatment the following day, according to the Sentinel’s sources.

The Sentinel’s story also makes public new details about the circumstances leading up to the deadly confrontation between Zimmerman and Martin.

At the time, Martin was suspended from high school after he was found to be in possession of an empty marijuana baggie, according to the Sentinel. Martin’s school has a “zero-tolerance” drug policy, the newspaper added.

Zimmerman was heading to the grocery store when he spotted Martin and called police to report a black youth acting suspiciously, possibly on drugs.

Zimmerman stepped out of his SUV to follow Martin, even though a police dispatcher told him he didn’t need to do so.