NORTH MIAMI (CBSMiami) – Fourteen blacks have been shot and two are dead in what may be one of the worst mass shootings in South Florida history and no one can seem to find Obama, Sharpton or Spike Lee to organize a rally, march on police stations, place bounties on the heads of the shooters or stage phony press conferences. This time it is fourteen innocent blacks shot, one a 5 year old girl! Two have died. Where’s the outrage?

Police also confirm that the Friday night shooting occurred after the viewing for 21-year-old Morvin Andre, who died after jumping from the 4th floor of the Aventura Mall garage while fleeing loss prevention employees after stealing store merchandise.

Gunshots rang out outside Funeraria Latina Emanuel on 149 Street and West Dixie Highway, according to police, hitting 14 people, including a 5-year-old girl who was transported to Jackson Memorial Hospital’s Ryder Trauma Center. She is currently in stable condition. 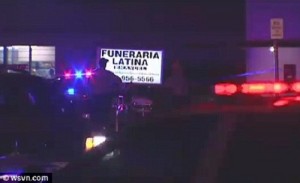 A 5-year-old girl, identified by her family as Mckayla Bazile, was shot in the leg and hospitalized at Jackson Memorial Hospital along with eleven other victims. The shooters were young black males.  So, for a moment, let me re-cap: A car full of  wicked men shot 14 black people for no reason whatsoever and Obama, Sharpton, Luis Farrakhan, Jessie Jackson, Spike Lee, and the New Black Panther leaders have not said a word! They have not organized rallies nor have they placed $10K or $1 million dollar bounties on the heads of the black cowardly shooters in that car.

WHERE IS THE OUTRAGE? We know where it is. It doesn’t exist! None of these race-baiters give a damn about these 14 blacks that were fired upon for no reason, nor do they give one damn about Trayvon Martin!  Instead they are disgracefully using his death to advance their racial narratives. To advance their racist civil liberties issues. To advance their Liberal views on gun control, on Florida’s “Stand your ground” law and to further divide this country down racial lines.

They have to CREATE their own racism because without racism, they would have no purpose!

Mckayla’s grandmother told CBS4’s Maggie Newland that the girl has a bullet lodged in her leg bone that doctors do not plan on removing, however, she should fully recover. The grandmother said she was on the phone with Mckayla when the barrage of bullets began and the girl said, “Grandma, I’ve been shot.”

Aventura Police Sgt. Chris Goranitis told CBS4 News the funeral was for 21-year-old Morvin Andre who died on March 16th, one day after he jumped from the 4th to 2nd floor of the Aventura Mall parking garage in an effort to escape pursuit by Bloomingdale’s loss prevention employees.

The Medical Examiner ruled his death a suicide because he chose to jump rather than be apprehended, according to Goranitis.

Meantime, a senior police commander told CBS4 investigative reporter Jim DeFede that Andre had some connection to several South Florida gangs and some of those gang members were in attendance at his wake to pay their respects.

The commander said someone at the wake touched Andre’s body in the casket in a way that other gangs took as disrespectful. This led to an argument inside the funeral home which spilled out to the street.

Members of one gang retrieved an assault rifle and a handgun from a car and opened fire at other gang members in front of the funeral home, according to the CBS4 source.

In the wake of the Trayvon Martin case and the media and minority leaders and the President rushing to judgement, we are all asking the following question: If Spike Lee, Rec. Al Sharpton, Jessie Jackson, New Black Panther Leaders and President Obama all Rallied against gang violence like they did recently for the self defense shooting of Trayvon Martin, would they curb the violence?

Would they even stop the violence? Why aren’t they out there doing that? We know the reason. That is not their purpose. Stopping violence, killings and crime by minorities is the farthest thing from their minds. Their purpose in life is to DIVIDE the country. Their focus is to create tension between races. Because without it, they would have no job. So as the United States progresses in improving race relations on its own, people like Spike Lee and Al Sharpton knock us backwards with their reverse racism. With their hatred and resentment towards whites.

Investigators believe that a white vehicle may be involved, according to Miami-Dade Police.

Pastor A.D. Lenoir Sr., who presided over the funeral service for Morvin Andre, said it was a chaotic scene after the shooting and he tried to calm everyone down.

The covered body of a victim killed in a mass shooting outside a North Miami funeral home on Friday, March 30, 2012. (Source: CBS4)

Pastor Lenoir was with the victim who died on the scene. “It’s horrible seeing someone pass on like that.”

Lenoir had a message to community following the shooting.

“It’s horrible the way our young people are responding to anger, to frustration, to their fears, to whatever issues they’re experiencing, it’s a low-down shame and I think it should quit. If you have problems, I think you should talk to your pastor, talk to someone that can help you, not to respond violently.”

“It’s more than crazy. They are destroying the community.”

No arrests have been made.

A total of 14 people were shot which makes it one of the worst mass shootings in the history of South Florida.