HomeHeadlinesDavid Bossie Has a Prescription for Those With Trump Derangement Syndrome
Headlines
January 13, 2019

David Bossie Has a Prescription for Those With Trump Derangement Syndrome 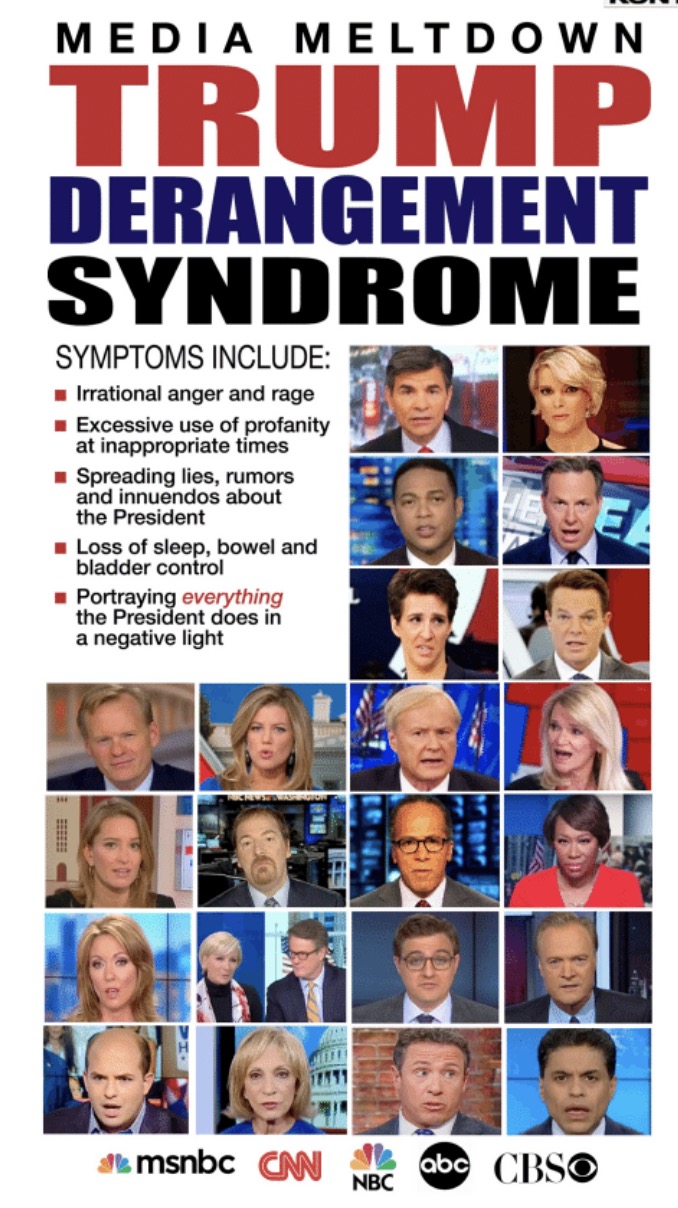 As soon as President Trump concluded his successful summit with Russian President Vladimir Putin in Finland on Monday, the Washington swamp and liberal media launched a concerted effort to falsely portray our president’s positive foreign policy achievement in the most negative light possible.

The rabidly anti-Trump reporters covering the summit were single-mindedly obsessed by the collusion myth – determined to prove that the Trump presidential campaign colluded with Russia to help Donald Trump win the 2016 presidential race, despite no real evidence to support this cockamamie theory.

Sadly, the media had little interest in delving into important issues that Presidents Trump and Putin discussed, including nuclear nonproliferation, destroying ISIS, ending the civil war in Syria, preventing Iran from building atomic bombs, and the security of Israel. Reporters could barely acknowledge the positive sight of former Cold War adversaries talking about peace and areas of agreement.

Instead, like hunters searching for the Holy Grail, the Abominable Snowman, Bigfoot or a herd of unicorns, reporters at the summit were determined to prove the existence of something that doesn’t exist – a grand conspiracy orchestrated by the Kremlin that put Donald Trump in the Oval Office.

President Trump’s political opponents are behaving like a rudderless mob, void of policy ideas, and hell-bent on provoking a confrontation.

To help quell the hysteria over one word he said at his summit press conference, President Trump clarified Tuesday that he misspoke when he appeared to indicate he was uncertain about whether Russia meddled in the 2016 election campaign.

The president explained that while he said the day before that “I don’t see any reason why it would be Russia” that meddled, he actually meant to say “wouldn’t” – giving his comment the opposite meaning. It was a small verbal slip like all of us have made at one time or another, yet the media and anti-Trump politicians fell over themselves to denounce the president as if he was a modern-day Benedict Arnold.

President Trump set the record straight Tuesday. “I accept our intelligence conclusion that Russia’s meddling in the 2016 election took place,” the president said, making a definitive statement that should put to rest any doubt about his confidence in the U.S. intelligence community’s conclusion.

The president then added, as he said many times, that “there was no collusion at all” between his campaign and Russia to influence the outcome of the election.

President Trump’s political opponents are behaving like a rudderless mob, void of policy ideas, and hell-bent on provoking a confrontation. President Trump, on the other hand, tried to lower the temperature and manage expectations heading into the summit and following the meeting.

Trump – the businessman, negotiator, and change agent – labeled Putin a “competitor” and stated quite reasonably that he’s a believer in diplomacy and meeting with world leaders. That’s a positive shift from some of the icy foreign policy positions taken by the United States in the recent past that prevented a dialogue between the two nations with the most nuclear weapons.

Unfortunately, it’s all too clear that the left has no interest in seeing America succeed under President Trump. Hillary Clinton – still not over losing the supposedly “unlosable” election to Trump in 2016 – even attacked the president in a tweet before the summit by questioning his loyalty to the nation he is so proud to lead.

Not long ago this type of vicious partisan assault on the eve of an important international meeting would have been unimaginable. Someone should ask Clinton whose side she’s on – but don’t hold your breath.

The media won’t ask tough questions of Clinton any sooner than they’ll ask President Obama, former Vice President Joe Biden, or former CIA Director John Brennan about why they sat back and did nothing about the Russian meddling that happened on their watch.

Those questions would elicit answers that don’t fit into the left’s narrative about Russia. The media steer clear of sore subjects like Hillary Clinton’s failed “reset” in relations with Russian Foreign Minister Sergei Lavrov in 2009; Obama’s enhanced “flexibility” hot-mic overture to then-Russian President Sergei Medvedev in 2012; and the Uranium One controversy involving Clinton.

All these issues would inevitably raise questions about the anti-Trump tall tale of collusion with Russia. So they are swept under the rug. The intellectual dishonesty coming from the left and its allies in the media is simply jaw-dropping.

The spectacle of Joe Biden – who accused GOP presidential candidate Mitt Romney of being “stuck in a Cold War mentality” in 2012 – now attacking President Trump and labeling Russia “our number one adversary” is the height of hypocrisy.

Everyone knows that the Obama administration was “all in” for a new Democrat-led alliance with Russia until it was politically expedient not to be. That’s the harsh reality that the liberal media isn’t honest enough to report.

On the heels of Friday’s indictments in the Russia probe being conducted by Special Counsel Robert Mueller, the anticipation surrounding the Trump-Putin summit reached a fever pitch. Right on cue, unhinged Democrats called on President Trump to cancel the summit, an absurd demand he rightly brushed aside.

If the president had decided to cancel the meeting on account of the charges of Russian meddling, he would have been criticized by the same politicians for showing weakness toward Putin.

Instead, in the face of unrelenting criticism, President Trump soldiered on and did what he thought was right. Few will admit it, but this is what leadership looks like; nothing fazes this president – and that’s one of the reasons he was elected.

Before the Trump-Putin meeting, the media focused on Russian meddling in our election like a heroin addict in need of a fix. Would Trump ask about it?  What would Putin say? Would it be covered in the meeting or at the press conference?

As it turns out, President Trump did the right thing. He confronted the Russian president about the recent indictments and what Russia did in 2016. Putin, like a true former KGB agent, denied everything. The media and the left, of course, were not satisfied. They’ll never be satisfied as long as Donald Trump is in the White House.

The truth is that all the left really cares about is delegitimizing President Trump, so that’s what the media focus on, ad nauseam. Russian meddling in the 2016 presidential election is an issue that the left cannot and will not let go of, and there’s nothing that President Trump can say or do that will ever satisfy these opponents.

President Trump states regularly that he has full confidence in our intelligence agencies, but the media choose to ignore this – prompting his statement Tuesday reiterating his position.

The media also ignore that fact that President Trump has ordered tough sanctions on Russia and has expelled 60 Russians from the United States in response to the poisoning in England attributed to the Russians.

Going forward, President Trump must continue to separate the two issues everyone in Washington is focused on. Yes, Russia meddled in the election and President Obama failed to stop it. But no, there was no collusion between Russia and the Trump campaign, and Russian meddling didn’t affect the outcome of the election.

Now it’s time for the hyperventilating to stop and for cooler heads to prevail. As a nation, we must acknowledge this necessity, take meaningful steps to stop any future outside election meddling, and move on.

It’s in our national interest to let President Trump focus on his agenda to Make America Great Again, and not tie him up in endless investigations responding to baseless accusations. The torrent of angry rhetoric, absurd charges and hatred directed at this president has reached a dangerous level that is harming our nation.  David N. Bossie is president of Citizens United, a Fox News contributor and the former deputy campaign manager for Donald Trump for President. He is the author of “Let Trump Be Trump”  and co-author of “Trump’s Enemies.”