Ethereum Could Hit $500 Before January 1st, 2018 After Major Announcements 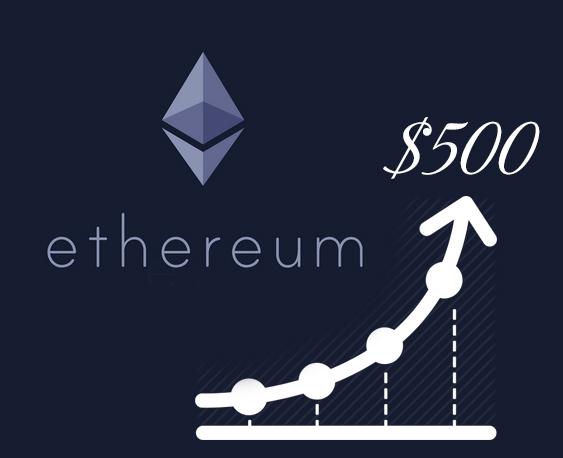 The next Ethereum (ETH) bull run could have it surpassing its recent all time high of $407 and go over $500 some experts say.

The price of ethereum hit an all-time high on June 12 of $407.10 after bitcoin also touched record levels. Ethereum was up more than 5,000 percent since the start of the year until it experienced a more than 40% correction. Some say this is due to a multi million dollar holder selling off much of its holdings in Ethereum. .

The excitement over the potential of the underlying Ethereum blockchain technology as well as support from governments worldwide is increasing appetite.

On Monday, in a volatile few days of trading, digital currency Ethereum rebounded nearly 40 percent from the seven-week low it hit last week.

The bitcoin rival dropped 22 percent Sunday, to a low of $130.26, before rallying 38 percent from that level to hit $199.98 early Monday evening, according to TradingView charts of Coinbase data. Ethereum last traded near $195, almost 2,000 percent higher year to date.

Ether is a type of cryptocurrency which runs on the ethereum blockchain, which is the technology that underpins the digital coin. But ethereum is often used as shorthand for the digital currency as well.

Ethereum has been designed to support smart contract applications. A smart contract is a computer program that can automatically execute the terms of a contract when certain conditions are met. This use has excited many investors, corporations and banking industries worldwide.

Ether is the second-largest cryptocurrency by market capitalization, worth around $36 billion, according to Coinmarketcap, below bitcoin’s $48.91 billion valuation.

Why has Ethereum rallied?

A number of developments in the ethereum community have supported the price rise. These include:

• The formation of a group called the Enterprise Ethereum Alliance (EEA) aimed at linking large enterprises to technology vendors to work on blockchain projects. Companies such as Microsoft and JPMorgan are involved.

• A surge in so-called initial coin offerings (ICO) which are a new way for cryptocurrency start-ups to raise money.
Vitalik Buterin, founder of Ethereum, recently met with Russian President Vladimir Putin, signaling that the country might be looking to use the blockchain, giving it further legitimacy.

• Singapore’s government released a report detailing a test it had carried out to digitalize a national currency using ethereum blockchain technology.

“Ethereum’s market message at the moment is that of the underdog to bitcoin with more potential. The complexity of the developing ethereum ecosystem is galvanizing adherents as well as displaying the functionality that it has to offer,” Charlie Hayter, CEO of industry website Cryptocompare, told CNBC by email.

Where does the Ethereum price go next?

Nicola Duke, a technical analyst at analysis platform Forex Analytix, said that ethereum has pushed through $377 easily, which is a key “resistance level.” This is a price that is reached but not exceeded by traders. But now that it has reached through this level, the next leg up in ethereum could see it reach $498 soon. Duke is a technical analyst using historical price activity to forecast future price movement.

Meanwhile, Wirex’s Matveev said that $600 by the end of the year is within reach, which would mark a 47 percent increase from Monday’s high.

Arjun Kharpal | @ArjunKharpal at CNBC Contributed to this article