Capitalism – What is True Capitalism?

The more intellectual a person is, the ore they hate capitalism.

And so, there’s something wrong with capitalism according to intellectuals and Liberals.

It’s pure ego actually. Nothing more than that. It’s not hard to understand. Intellectuals don’t like capitalism, and they don’t like America, because they resent it. They’re the smartest people in the world, and yet capitalism doesn’t take care of them — and that’s why it’s gotta be changed.

That’s Barack Obama; that’s his professors; that’s the people who’ve mentored him, that’s his late mother and late fathers. That’s who they are. Hard work doesn’t count for squat. It’s how smart you are. In fact, in a Liberal’s world the smarter you are, the less hard you have to work. And that ought to be rewarded. It’s a neat perversion of so many American traditions and ethics.

The actual term “capitalism” was rarely used at the time America was Founded. The Founding Fathers supported the principles of Capitalism mainly by the economic liberty underlying it. The Founding Fathers understood very well that citizen’s property rights and free markets were important elements supported by the Constitution and an integral part of what it means to BE FREE. The Founders believed that government has a responsibility to protect the rights of all to participate in the economy by upholding contracts, lifting artificial trade barriers, and protecting the right to acquire, possess, and freely use property. 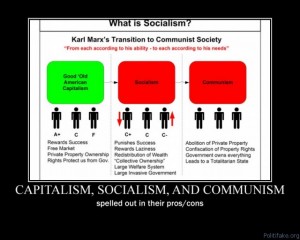 The Founders did not, however, advocate a completely “laissez-faire” economic policy, since they understood that the government had a role to play—a limited role—in regulating the economy. For example, at the time of the Founding, the government inspected goods that were imported into the United States and created licensing systems for certain professions—such as medicine—that were essential to public health and safety. Such regulations strengthen a free-market economy by protecting consumers from fraud and by expanding the opportunity for all to participate in the market by ensuring the reliability of goods and services.

The Founders’ defense of limited regulations enacted by elected representatives is a far cry from the Progressive embrace of far-reaching regulations made by unelected and unaccountable bureaucrats.